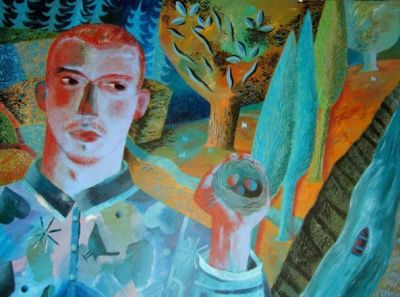 Clive Hicks-Jenkins was born in 1951 in Newport, South Wales. From his early twenties until his mid thirties, he was an actor, choreographer, director and stage designer, creating productions with leading companies. He moved back to Wales permanently in the late 1980’s to concentrate on his work as an artist.   His work has been selected for several prestigious institutions, including the Royal Academy. Clive was winner of the Gulbenkian Welsh Art Prize in 1999, runner-up as Welsh Artist of the Year in April 2000, and in 2002 received a Creative Wales Award from the Arts Council of Wales. His solo exhibitions have been reviewed in Modern Painters, Art Review, Galleries, Planet and the BBC Wales series Double Yellow. He has shown at the Martin Tinney Gallery, Cardiff  and has been a member of The Welsh Group since 1997. In 2011 his work was celebrated in a hugely successful retrospective at the National Library of Wales, Aberystwyth.

Clive Hicks-Jenkins explores a narrative tradition of painting, particularly in relation to the Welsh mumming custom of the Mari Lwyd, and in his examinations of stories with miraculous events at their hearts. His Mari Lwyd drawing, Stumbles and Cannot Rise, is in the National Museum of Wales, his re-imagining of the annunciation, The Virgin of the Goldfinches, hangs permanently in the Saint Dyfrig Chapel of Llandaff Cathedral in Cardiff, and his painting, Christ Writes in the Dust, was commissioned for the Methodist Collection of Twentieth Century Art, held at Oxford Brookes University. For a decade he's regularly produced works on the legendary themes of the blind Breton monk, Hervé, who had a wolf for a companion, and the Irish hermit, Kevin. Kevin held a nest in his outstretched hand while a blackbird laid and incubated her eggs in it, hatched them and reared her young until fledged, a legend recounted by Seamus Heaney in a poem the artist has long referenced in his paintings on the subject.

For his new exhibition at Oriel Tegfryn ‘Telling Tales’, the artist has made new works of Hervé and Kevin, and has been revisiting his Mari Lwyd theme. In 2012 Mid Wales Chamber Orchestra commissioned composer Mark Bowden and Aberystwyth-born poet Damian Walford Davies, to make a chamber-work with a spoken libretto, taking inspiration from the artist's 2001 series of large black and white Mari Lwyd drawings known collectively as The Mare's Tale. Last year Clive Hicks-Jenkins designed and directed the first Mid Wales Chamber Orchestra performance of The Mare's Tale, and Oriel Tegfryn will be showing paintings he's subsequently produced, inspired by its music and libretto.

Clive has also recently been inspired by the theme of Stravinsky’s The Soldier's Tale, in which Joseph the soldier unwittingly makes a pact he'll come to regret. Last year Clive Hicks-Jenkins was commissioned to make an animated-film to accompany a performance of The Soldier's Tale at the Hay Festival, and his new paintings further exploring the story are at the heart of this, his first solo exhibition at Oriel Tegfryn.

All the work is for sale