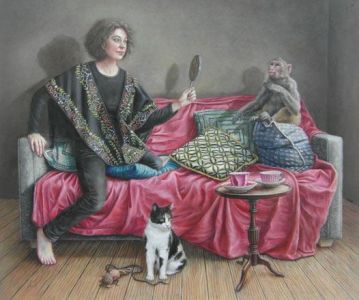 Sally Moore was born in Barry, South Wales in 1962. Her mother, Eira, was a choreographer and teacher and her father was the highly regarded painter Leslie Moore.  From school in Barry she went to Oxford University and Birmingham College of Art. After college she won a prestigious Delfina residency to set up her studio in London. Her painting has been recognised in numerous awards, including the Abbey Scholarship in Rome, the Discerning Eye and the Welsh Artist of the Year.

She has exhibited regularly at Martin Tinney Gallery since 1995 and her work is in many public and private collections, including the National Museum & Gallery of Wales, National Library of Wales, Newport Museum and the Contemporary Art Society.

Because of her painstakingly detailed style of painting, Sally’s exhibitions are infrequent and always eagerly anticipated.  In these new paintings, she continues to explore mood, memory and states of mind through the use of surreal metaphor. A giraffe is ridden down a city street, a monkey is invited to a tea party, blindfolded figures find each other in a forest and women scramble across a welsh landscape.  ‘Each painting attempts to capture an intense moment. These moments can be pleasurable but sometimes they can be confusing and distressing. Their memories stay with me both in reality and in my dreams’.

The novelist William Boyd has written about the fascination of seeing Sally Moore’s paintings all together so as to reveal her long project to explore mood, memory and states of mind.

Peter Wakelin writes; 'Sally Moore paints worlds where fiction is truer than fact, where outer absurdity stands for inner reality. Like an actor, she uses her observations of people and situations to explore ideas with herself as the performer'.

This exhibition marks the publication of a major new book about Sally Moore and her work. The book, titled Sally Moore: Acting Up, shows her paintings as a kind of demonstration, taking back control from the hidden worries and fantasies that plague most of us. She uses herself as a model in absurd, imaginary situations that stand in for inner reality. Through surreal metaphors – tigers in the sitting room, monkeys on her dining table, small boats taking her to sea – she represents common fears and social expectations, often with surreal humour. The monograph is written by Peter Wakelin and published by Sansom & Co and will be launched at the opening of the exhibition.